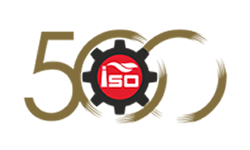 Dünya Newspaper: Eroğlu Giyim reaches for the sky in ISO 500 with her investments

Eroğlu Giyim with 2 thousand 140 employees in Turkey, 2 thousand 800 employees in Egypt, one of the leading denim confection producers, continues to go up to top steps in the second 500 list announced by Istanbul Chamber of Industry (ISO). She became 132nd by increasing up 20 ranks in the second 500 in 2010. Eroğlu Giyim determinant to continue the success in ISO targets to go up in the list in the next period with new investments.

Ümmet Eroğlu, Chief Executive Officer of Eroğlu Giyim, saying that the company has a special place for she is the first company that lays the foundations of Eroğlu Holding, stated that their production continues with full capacity in the Çorlu and Aksaray factories in Turkey since 1983. Eroğlu said that they made a confection investment where today 3 thousand people work in Ismailiye, Egypt. Giving the information that they will realize a production of 13 million pieces at the end of 2012, Eroğlu said that “We have a rank 20 rank up compared with the last period in the biggest companies of Turkey, in the second 500 in 2011. I believe in that we will go up in the next period with the investments we did last”.

The production in Aksaray Factory starts in 2013

Ümmet Eroğlu, saying that 2011, which they felt the effects of economical crises was a year better than their expectations for themselves, gave the information that they realized a production of 5 million pieces in total in their factories in Turkey and sales of 75 million dollars, of which 46 million dollar is export. Remarking that in addition to this, the made sales of 58 million dollars for the production of 4 million pieces in their factories in Egypt, told that they have more positive expectations compared with the previous year. However pointing out that customer demands reached almost twice of their predictions for this year, Ümmet Eroğlu stated that they have many difficulties for their production capacity because of this. Saying that they increased their production capacity domestically according to the demand coming, Eroğlu said that they have the expectation that the same intensity will continue in their works until the end of 2012.

Expressing that their expectations for the end of 2012 is 125 million dollars with 7.5 million pieces in Turkey and sales of 78 million dollars with a production of 5.5 million pieces in Egypt, Eroğlu said that “the reason that we have positive expectations for 2012 is the investments we have started. We will both increase the capacity of the factory in Aksaray where we only conduct sewing operations and rearrange such that an integrated production may be conducted from cutting to shipping according to the Promotion Law come to force in 2012 and the supportive signals we take from our customers. We plan to start production in this factory as from the first months of 2013. By this investment, the existing employment in Aksaray will be increased a thousand people. As Eroğlu Giyim whe have the portfolio of manages who have the knowhow, skills, and are international for making production everywhere in the world. We plan new investments in the future periods in some countries where the conditions are suitable”.